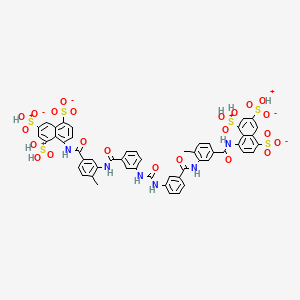 Suramin is a polysulphonated naphthylurea with potential antineoplastic activity. Suramin blocks the binding of various growth factors, including insulin-like growth factor I (IGF-I), epidermal growth factor (EGF), platelet-derived growth factor (PDGF), and tumor growth factor-beta (TGF-beta), to their receptors, thereby inhibiting endothelial cell proliferation and migration. This agent also inhibits vascular endothelial growth factor (VEGF)- and basic fibroblast growth factor (bFGF)-induced angiogenesis; retroviral reverse transcriptase; uncoupling of G-proteins from receptors; topoisomerases; cellular folate transport; and steroidogenesis. (NCI04)
Suramin is a member of the class of phenylureas that is urea in which each of the amino groups has been substituted by a 3-({2-methyl-5-[(4,6,8-trisulfo-1-naphthyl)carbamoyl]phenyl}carbamoyl)phenyl group. An activator of both the rabbit skeletal muscle RyR1 and sheep cardiac RyR2 isoform ryanodine receptor channels, it has been used for the treatment of human African trypanosomiasis for over 100 years. It has a role as a ryanodine receptor agonist, a GABA-gated chloride channel antagonist, a GABA antagonist, an apoptosis inhibitor, an antineoplastic agent, an angiogenesis inhibitor, a purinergic receptor P2 antagonist, an EC 2.7.11.13 (protein kinase C) inhibitor, an antinematodal drug and a trypanocidal drug. It is a member of phenylureas, a secondary carboxamide and a naphthalenesulfonic acid. It derives from a naphthalene-1,3,5-trisulfonic acid.
Suramin, also known as naganol or naphuride, belongs to the class of organic compounds known as benzanilides. These are aromatic compounds containing an anilide group in which the carboxamide group is substituted with a benzene ring. They have the general structure RNC(=O)R', where R, R'= benzene. Suramin is a drug which is used for treatment of human sleeping sickness, onchocerciasis and other diseases caused by trypanosomes and worms. Suramin is considered to be a practically insoluble (in water) and relatively neutral molecule. Suramin has been detected in multiple biofluids, such as urine and blood. Within the cell, suramin is primarily located in the cytoplasm and membrane (predicted from logP). Suramin can be biosynthesized from naphthalene-1, 3, 5-trisulfonic acid.